Not With a Bang, but a Whimper 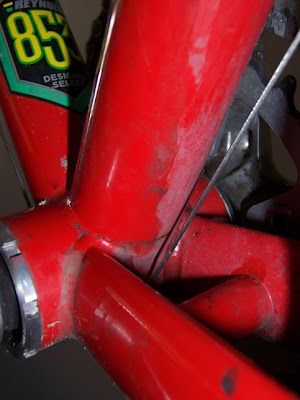 Maybe this is what it's like to be told by the Doc you have 6 months.
Gentle Reader, you probably don't have to look close to see the crack in the frame of my LeMond. This is my Fast Bike, this is my Brevet Bike--this is my Lovin' Life in the Tucson Sunshine While You're All Freezing Your Asses Off in the Rest of the Country Bike.

I do not believe this can be repaired. I don't quite know what to do or where to begin. Does this mean that the bike is too dangerous to ride until I get it welded? Can it even be welded? Is it worth it to get it welded? It's a steel frame and should count for something, right?
I called Gerry Goode and we had a frank talk. Most likely water got in there and the inside of the frame joint began to rust and got weak. The frame is eight years old--could it be that that's the life of a frame like this? My Raleigh Super Grand Prix, circa 1977 with it's lugged steal joints still looks brand new (I check it out to be sure I wasn't going to get more bad news).
Gerry says its time to get a custom frame built.
Okay, just like that--I'll have a custom frame built and spare no expense...
These are tough times for us right now. Little Egypt has been unemployed since her return from Afghanistan--which has been frustrating. Money I make covers the mortgage, and car payments, and some of the bills. After that, there's not much left. Many a soldier has returned to find the economy in rough shape and jobs hard to find. Luckily while she was deployed and making combat pay, I payed down big chunks of our debt and lived as frugal as possible.
Money for a new bike is just not in the near future--
Just tough on me when I've got this bike that with all the up-grades and bike fit and wheels, etc etc--just can't be replaced by going out and dropping $2,000 for a frame. It took time, trial and error, and many miles on the road to make this bike into what I needed. Its a Randonneur's Dream to be sure, mes amis.
Cheers! Bruce
Posted by Bruce's Bike Blog at Sunday, March 15, 2009 11 comments:

Labels: cycling in the desert, randonneur 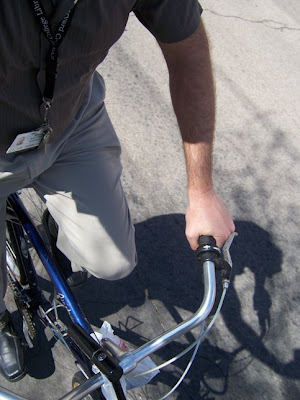 Best to get around by Campus Bike if I have errands; most I can do on my lunch hour as everything is within a half mile of my office.

The Desert Sanitarium, a sprawling medical complex, creates a good deal of street congestion. One of the main intersections by the San is undergoing major renovation the next few months. Travel by auto is even more at a stand-still—in all directions.

I always try to take the quiet back streets to get away from the medical offices and strip malls right there on the main drag. Everybody’s rushing in and out—on their cell phone—speeding and not stopping at the lights or stop signs—mainly Desert San nursing staff that got to buy their Mtn Dew and cigarettes. 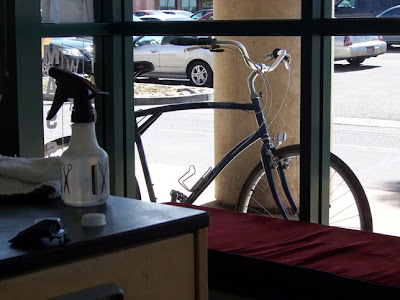 The San was in the open desert in the 1920’s. That’s pretty much gone. But there’s an ancient mobile home park nestled right in this neighborhood that dates back about 50 years. It’s over-grown in a jungle of vines and cactus and palm trees, kind of like those Aztec and Mayan ruins you see about on TV. 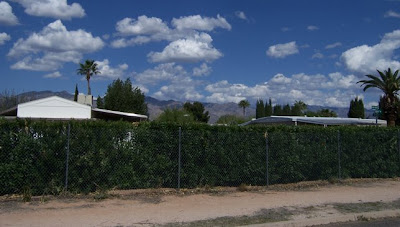 I wonder if there’s men still living there that fought in the wars—hit the beaches at Normandy (like my Great Uncle Clyde Crosslin) or flew over Europe on bombing raids, or flew over Hanoi during the Viet Nam War—or still remember seeing their first airplane in France 1917 like my Grandfather did (he was in the Navy in WW I)

Time, waiting it out—Death—light-speed lives in bumper-to-bumper traffic—and then this trailer park being devoured by green old trees. There seems to be ones to replace the ones that are dying—just a little bit of water and they keep growing. The Mountains in the background have it made—until we figure out how to take them all down. 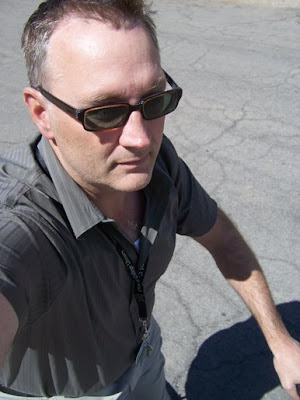 Bryan seemed distracted and he cut my hair really short—shorter than I like.
Posted by Bruce's Bike Blog at Thursday, March 12, 2009 3 comments: 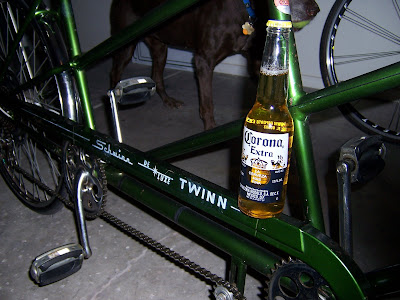 I rode Little Soldier down to my neighbor’s house to pick up beer. Little Egypt has been out of town so Little Soldier has sat un-used in my bike storage facility—um, I mean garage—waiting for her return.

As this old tandem has lights—the original lights that still work, Gentler Readers of This Blog, there is no excuse to drive the car over to friends when one can ride a bike with perfectly good illumination.

So I headed out at dusk, solo on the tandem, to Bruce and Heather’s house down the road a ways. The generator light whirled and the big red tail light glowed a deep ruby-red that reflected brightly on the shiny chrome rear fender, and down on the street behind me. The head lamp shown a steady, but faded yellowish-amber sphere on the pavement ahead of us.

As Bruce and Heather’s place is down the road, I picked up speed quickly on the slight descent, and then maneuvered a left to the gated entrance off Dog Mtn Blvd where they live.

They bought one of those McMansions and it is a horrific structure, mes amis. They actually live in the house—the others around them are vacant. They were bought as investment homes to flip; now they sit empty. The street is dark and lifeless but I’m on Little Soldier—and we are moving through the warm desert air with a mission: Beer.

I’ve brought some of those re-useable grocery bags for the beer. Bruce and I load them up and tie them to the sturdy frame of my 1971 Schwinn De Lux Twinn.

“Honey, you have to come see this bike,” Says Bruce. But Heather, his wife, avoids getting close to it—as far as she’s concerned, it’s some kind of huge green phallus built for two.

She drives a Lincoln Aviator, in which they have negative equity at this time. Bruce wanted to sell it but they were told they would get nothing for it. So they owe more on the vehicle than its worth—sounds kind of familiar, eh? She drives it five miles to work.

Heather is the type of driver every cyclist loathes—huge bling SUV with super turbo V-8 engine, cell phone glued to her jowl—or she’s texting some piece of illiterate shit friend that she works with at Comcast—oh, and did I mention she’s a speeder? When not behind the wheel of an automobile, she's kind of a fun person.

We say our good-nights as its getting late, and I start out for home, up the road now with bottles of cold Corona strapped to Little Soldier. Climbing up Dog Mtn Blvd is easily accomplished, and my house appears in no time. Callie hangs out in the garage with me while I do a few odds and ends and sips me beer.

It seems I caught Traveler's Diarrhea or sometimes known as "Golfer's Diarrhea" which is a virus that many visitors seem to suffer from when they come to see their friends in Tucson and play a few rounds of golf.   But really anyone can get it--just that the illness seems to start out at the local country clubs and soon everyone ends up in the hospital.
You would guess it was a case of food poisoning, but actually its some sort of bad-ass virus that knocks you out for three or four days--or worse.  It spreads around and visitors are pretty susceptible. Folks are out playing golf and if someone with a weaken immune system that's come down from Wisconsin, or Michigan, gets the virus, well it attacks them and then spreads to their friends, and then the virus gets stronger then spreads through the community.
Tucson has been flooded with people from out of town for the Gem Show and for the Match Play Golf tournament that just ended this weekend.   The weather here has been fantastic, Gentle Readers of This Blog...
I feel like I've been hit by a truck and sucker-punched in the kidneys.
My weekend to train and in put in the miles for the up-coming 400 KM Brevet were dashed.  I spent Friday at work in a funk, and then all weekend in bed, making a trip to the bathroom every half-hour for 24 hours.  Sunday I was able to walk around the house, taking several rest breaks, and then was just able to get to the store to by some supplies.
Monday, this morning, I went into work, and my boss said I still looked green.  Her friends visiting from Canada had fought the same thing all weekend as well.  So she said I better just go back home and get some rest.
Not sure now I can ride a 400 KM brevet after this blow to my body.   Just when I feel better and start to move around, suddenly I'm tired again and must rest.
Cheers,  Bruce
Posted by Bruce's Bike Blog at Monday, March 02, 2009 1 comment: